​Welcome to the digital version of "Schulhoff", complete with digitized research boards and performance recording. This contemporary dance work seeks to revive and honor the music of Erwin Schulhoff, a Jewish composer and Holocaust victim. A radical and innovative artist of his time, Schulhoff was one of the first European musicians to incorporate jazz into classical music forms such as symphonies and concertos. The Nazis deemed jazz and all forms of modern art a threat to their ideology and sought to completely erase from history the work of Schulhoff and many other artistic trailblazers. This performance celebrates the survival and legacy of Schulhoff’s music while investigating the Nazis' ban on art forms that embraced freedom of expression and created pathways to share new ideas, voices, and perspectives.“Schulhoff” is made possible by the generous support of The Beker Foundation. This work was developed through the Boston Center for the Arts Dancemaker's Laboratory program and presented live in Spring of 2022 at New England Conservatory, the W-Gallery Wayland, and in CURE8 Cambridge at The Dance Complex.
​
About ZACHOR:
“Schulhoff” is the newest work in Rachel Linsky’s ongoing project series, ZACHOR (remember), which seeks to preserve the memories of WWII Holocaust survivors and victims through dance. CLICK HERE to learn more about ZACHOR and see past works created in this series. 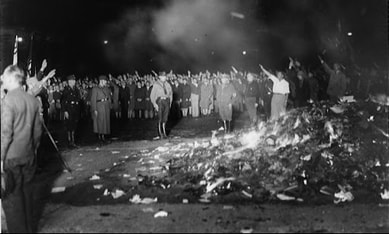 On May 10, 1933, as part of an effort to align German arts and culture with Nazi ideology, university students across Germany burned thousands of books they considered to be “un-German,” which began an era of censorship and cultural control. Students threw books confiscated from public libraries and university libraries into bonfires. The participants sought to purify German literature of Jewish, foreign, and other immoral influences.
"To liquidate people, you start by depriving them of their memory. They destroy your books, your culture, your history. And someone else writes other books, gives them another culture, invents another story; after that, people slowly begin to forget what they are and what they were. And the world around you forgets even faster."
- Milan Kundera

After WWI, Under the Weimar Republic, Germany was becoming a vibrant, innovative, and broad-minded scene for the arts. New ideas, perspectives, and influences were readily embraced, opening pathways to success for minority groups. The Nazis felt that this new wave in the arts posed a serious threat to their ideology. When the Nazis came to power in 1933, they began to gradually exclude Jews and non-Aryans from cultural life. They had a narrow definition of acceptable German literature, and began crafting their attack on art and music as well. ​
Propaganda Minister Joseph Goebbels, organized the touring exhibitions “Entartete Kunst” (1937) and “Entartete Musik” (1938) to culminate the Nazi’s increasing efforts to restrict modern art and music. These exhibitions were designed to mock modernists whose work did not align with Nazis’ ideals and instill public fear towards the artists that were considered racially inferior according to Nazi policy, regardless of style. After these exhibitions, the displayed artists were barred from jobs and forbidden to create and perform. 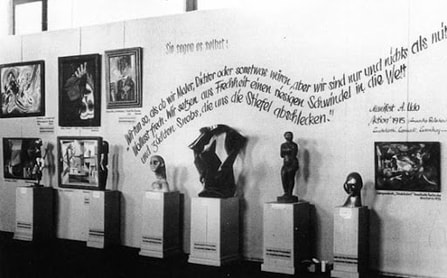 ​Confiscated artworks were crammed chaotically together in the exhibition space alongside derogatory graffiti comments. Among the 650 pieces on display were works by Otto Dix, Max Beckmann, Marc Chagall, George Grosz, Mondrian, Kandinsky, and Paul Klee. After the exhibition, many were publicly destroyed. 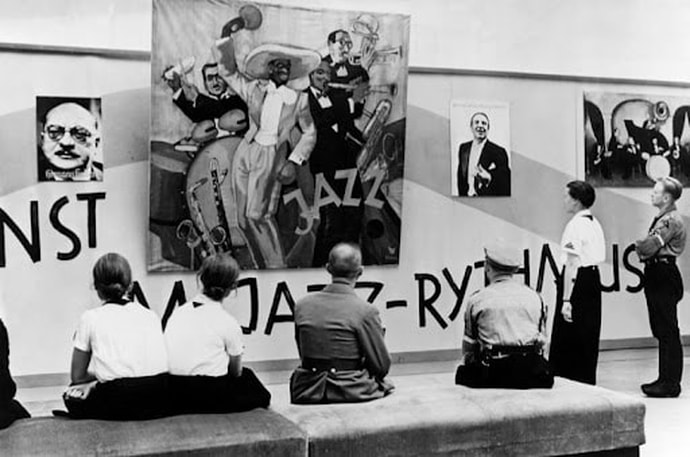 Inside of the 1938 Entartete Musik Exhibition in Düsseldorf.
Photo courtesy of Deutsche Welle (DW)

How did Jazz, which originated in the African American communities
​of New Orleans, make its way to Europe?
In the early 1920s, African American jazz artists could not break through the racial divide in the United States, so some took to Europe where they could perform with ever-growing popularity. Jazz was said to have “A musical dictatorship over the masses”. Of all the musical genres banned, The Nazis felt most threatened by jazz because of its African-American roots and the large number of Jewish jazz musicians practicing in Europe at the time. They believed jazz to be a conspiracy against German culture.

“Absolute art is revolution, it requires additional facets for development, leads to overthrow in order to open new paths... The idea of revolution in art has evolved for decades, under whatever sun the creators live, in that for them art is the commonality of man. This is particularly true in music, because this art form is the liveliest, and as a result reflects the revolution most strongly and deeply–the complete escape from imperialistic tonality and rhythm, the climb to an ecstatic change for the better.”
- Erwin Schulhoff
“By keeping alive the music of the victims of totalitarianism, we deny those regimes any posthumous victory. The revival of this music can serve as a reminder to resist any contemporary or future impulse to define artistic standards on the basis of a racist or exclusionary ideology.”
- Fred Mazelis